In 2021, Twitter had several threads on UHI or Unidentified Health Incidents.Being a civilian, I waited until the State Department opened to accepting their in-house form about UHI to civilians. The United Nations deemed the term "Havana Syndrome" to be inappropriate and causing discrimination of the place and people of Havana. So the more proper terms are UHI and Cybertorture. 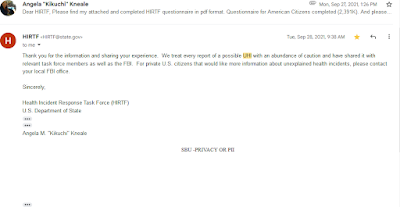 Though I submitted the Federal form sent to me by the US State Department, they only sent acknowledgement of receipt of my completed UHI questionnaire. And, that this form of Cybertorture is only one incident among dozens, if not hundreds throughout my life.I have been reluctant to share the Cybertorture I have experienced fully. But it has had a lasting traumatic and life degrading impact upon my life since childhood.And, I am still working up the guts to write about my experiences of Cybertorture fully.

But in 2019, I responded hastily with my extremely conservative answer to an email from TargetedJustice.com to reply to the UN Special Rapporteur on Torture's "Psychological Torture" questionnaire. View at:  http://www.sproutfuel.com/2019/12/my-hasty-response-to-un-cat-torture.html

In 2019, I also met those at the newly formed group TargetedJustice.com in Washington D.C. metro area for some protests at the White House, Director of National Intelligence, and for a gathering for dinner. However there are many people in their following who have attacked me, or displayed anti-Asian American Pacific Islander (AAPI) aggression online. I reported the email hate incidents as AAPI hate incidents where appropriate to an AAPI specific hate incident reporting group. It's only for statistical purposes to the best of my knowledge.

Additionally in 2022, another new Civil Rights leader involved with Targeted Massachusetts, The Allen Human Rights Institute, who verbally attacked me during a Zoom meeting of international activists hosted by UK's Roy Eacups. Mr. Frank Allen further went about making accusations against me of destroying his online presence;- after I reported a suicidal attendee during that meeting to Zoom. I reported an issue to Zoom because Mr. Allen was broadcasting the meeting online to his platforms, and I had joined the meeting by a late invitation unaware it was being broadcast. The incident may have caused another USA attendee to announce his suicidal thoughts immediately after commenting on the incident. Zoom allegedly banned the Civil Rights leader for violating community standards after my reporting. I took no further actions aside from following Zoom's instructions to help the suicidal attendee find resources. And, I quit attending meetings to shield from more attacks and preserve my ability to have a Zoom account at all. So two new fails to finding solutions to cybertorture through US Civil Rights Groups mostly due to the Anti-AAPI sentiment and insincere actions of non AAPI leaders.