This short summary of IoBNT was prepared on June 18, 2021, by Angela Kikuchi Kneale as part of the Civil Rights research summary into cybertorture. The main goal of this summary is to generally explain the focus on research work to have a secure one-time data transfer from cells and/or molecules. And also to identify general shortcomings in such research that is financed by governments and defense companies.

One of the data security goals of IoBNT technology is to use the human body as a channel for secure data storage until secure signals or light-based retrieval happens in-body (IB);- that there is an implicit 1x use for cells and molecules in the data traffic retrieval instance. One of the complications is that the channel is compromised when information is released into the environment. However, it seems that the use of nano-machines and IoBNT have a partial goal of changing cells and molecules to create a  cell or molecule recognition failure for any secondary data retrieval attempts from those same cells used for initial data storage and retrieval.

This type of changing of cells' shape and molecules occurs after data retrieval so that the system is secure and contained- once the data or information has been initially extracted to achieve secure transmission. In commonly accepted ethical theory or "assumed" morality of researchers, on a nanoscale- this type of technology and data traffic event seems like it should be non-lethal.

Despite forms of espionage that typically leave a host dead during information exchanges being well advertised in mainstream media, this type of IoBNT"espionage" tool would hypothetically enable any agency using IB nano-tech for data retrieval to choose ANY consenting or non-consenting human channel. Here, I dare to make the connection of a human channel as a non-consenting human being instead of a free piece of existing human wetware for some researchers. However, for researchers and technologists of IoBNT, there is no correlation between a human channel as a person who is a living being and any ethical concerns for the well-being of that living person with rights.
"Light" is a term used as one of the generalized ways to affect cells and molecules' shape to prevent secondary detection and use of signals. "This category of materials integrates nanostructures capable of responding to a wide variety of light wavelengths ranging from microwaves to infrared."1  Light does not always correlate to LED, infrared, or Ultra Violet bandwidths.  Whether or not the light* used is generated by 5g or microwave, UV, showing waveguides or wavelength, exotic signals, photonic, scalar, or irradiation is commonly not indicated.

How Does Cell shape change?

One obvious way may be cellular dehydration. Another way is conjoining infection-like technology with a bio-toxin, secondary nano-tech, or bio-nano machine.

ie., see pics below of my own live blood microscopy session pics -

4. Red blood cells -- take a hexagonal shape-- probably from a lack of oxygen and/or cellular death in close proximity to the presence of a bio-toxin. 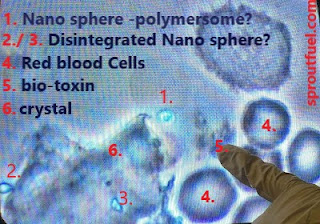 Nutritional Microscopy 2014 session of Angela Kikuchi Kneale's blood- Biotoxin illness.
cells no longer round at all in a micro-clot web

Essentially the concept is that there is a "data traffic flow" that may disable cell function for data security in the Body Area Network.

This may happen practically simultaneously by the use of light speed and latency- Latency rates are frequently not stated in research papers and show a lack of the researchers' ability to collect proper measurements. There are many types of measurement equipment for signals and nano-technologies that only exist in classified or top-secret government or defense facilities which may be attributed to the lack of measurements.  Yet, a lack of this data does not inhibit or exempt researchers and patents from the acquisition of the funding or sale of technologies to defense or government for use "AS IS".

There are also several blaring, missing comparisons for quantified cell or molecular data;

1.  How many cells are used and recruited for signal transmission is not mentioned as a finite number.  Rather, the amount of "data traffic" is quantified.

ie,.  using the 2nd live blood microscopy pic above of a web of dead red blood cells in a singular drop of a blood specimen can be quantified by counting individual cells on a portion of the slide.

The problem with reading data retrieval research conducted in cadavers is that the "consumption of flesh" during signal use is cited in a variety of ways. So it leaves the reader questioning if:

1. the destruction of cellular materials is external and/or internal to the cadaver.

2a. If other signals include those pertaining to genetic data transmitted into a cell such as mRNA.

2b. If this type of data transmission is intended for the assassination of the target as a non-channel.

2c. If nano-technologies carry cell shape change or molecule shape change genetic data that has a time-release or light-based release transfer to cells, that it creates backup storage in other cells or molecules.

2d. If this type of data transmission is intended to cause harm, death, or injury to the same or a different human channel as a human channel or human person.

3. the destruction of cellular structures is caused by toxicity or a chain of cascading reactions linked to toxicity.

Suggestion: Researchers could attempt to do their experiments in smaller LIVE human blood samples and provide quantitative data of cellular destruction and shape changes before proceeding in a very large cadaver. This should work unless the toxicological effects of their nano-tech cause damage before being able to run the data experiment.

2. There is no apparent correlation between the change of cell shape in a timeframe during or after data traffic events.

3. To what extent are bio-nano-occupied cells identified by a light retrieval method of communication, and is that light from a particular type of irradiation or wavelength.

4.  Smart cities technology research has picosecond data packet download rates and other latency rates that can be used for arbitrary comparable latency rates for speed of data retrieval.

Additionally, I was only able to find one example indication of live human testing that is confirmed in publicly available research articles. That example was from a Chinese university and was published in 2019. These IoBNT types of technologies are frequently tested on cadavers and execute their purpose of data transmission through signals transmission via cadaver(s). The cadavers typically used are human or porcine (pig) and include animal experimentation on primates, rodents, etc.

It seems that researchers are indifferent
that the human aka channel is alive for the data or signals transmission during live human tests that fall outside the scope of "medical practice". In 2021, public interest journalists, whistleblowers, medical professionals, and researchers revealed to the public that the injections of nano-technologies in live humans, fall outside the scope of medicine and consent factors and ingredients listed.

Maybe, someone in this line of IoBNT research will attempt to prevent a section of cells from dying at once in the human channel during signal propagation and could find some way to direct the secure channel to a more receptive connection requiring less "light". The purpose is to suggest having a less severe light retrieval method due to distance;- since cells are noted to die and weaken the signal strength. It seems unlikely to use intense radar signals for HBC, even with current electronic warfare capabilities of radar being nearly equal to or surpassing microwave capabilities.

*note: The language of using "light" broadly speaking overlaps with new religions- ie, Aurelian technologies - used with spirituality. Some of these light-based religions may use scalar and irradiation technology as forms of light, in addition to the photonic light of raising a hand. Photonic light naturally occurs from the hands' fingertips and also feet. These are supposed to be scientific research papers and describe the signals propagated rather than using a new age religious spiritual light language. ET in the military language is generally known to be an Electronics Technician. Yet ET is used in Aurelian spirituality as Extra Terrestrial or "Alien" in defining their 'technologies of spirituality' and use of light.