Retrospect on Toxic mold AND Nano-tech

In retrospect, with so many nano-tech reporterrs showing cutting edge creations;- I've put together a different perspective of what I once called "toxic mold".yes, click on the link to find a real glimpse of the microbe toxic mold. Then start the comparison to how it doesn't look like what was in my blood.
Here's the first and one of very few pictures I have from my personal medical files that iCloud took away from me aka locked me out of my iCloud account. It looks like the Toxic Mold plushie more than the microbe.
But it definitely has black spots like anake venom under a microscope-- indicating a biotoxin.   One of My Twitter and IG handle is @ImperialNewsJ. 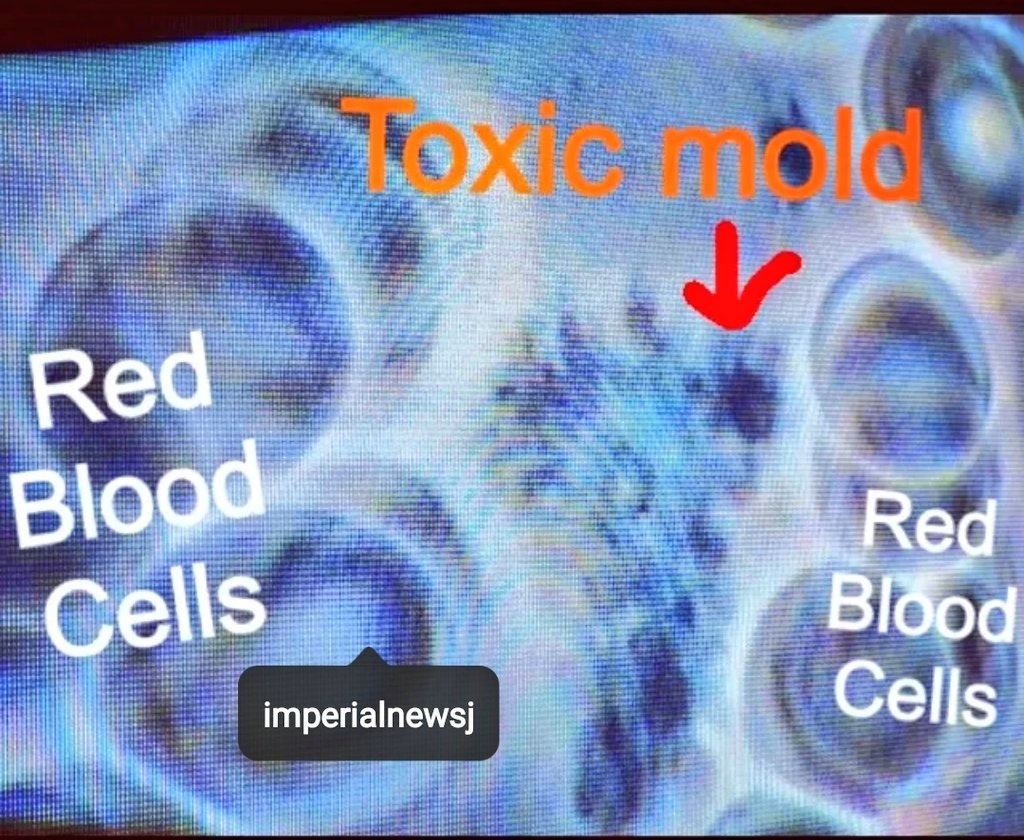 I now understand that the researchers and "powers that be" use a bio-toxins such as black mold microbe (not nano), or hydras as an obvious culprit to blame for the array of symptoms and microscopic nano-crystals. However, after another hard long look at several other pictures I took of my own microscopy session-- I understand there was alot more to blame than "mother nature's bio-toxins."
Red Pill, was nothing I subscribed to in the past. But undeniably the professional reporters present so much information about these old pics Ifrom a microscopy session I had stored away as "natural biotoxin" byproducts (Especially see the gloved hand pointing below)
These pictures were "interesting areas" that lacked the black mold.  And I agreed and nodded my head along with the microscopist the whole way without researching any further that this was toxic mold cause and effect.
But, here's my self reflection in 2021-2022:  In some pics little black dots are suspect of "malaria" attacking cells. Other nano sized black dots may be biotoxins/mycotoxins killing cells and/or graphene. I've found plenty of pics that make graphene a primary suspect, and it is highly toxic in an of itself. What a great compliment to the microbe black mold that is micro-sized and much larger than 20nm or the size of 2 red blood cells.
Clear Angular crystals also show up as micro sized (bigger than red blood cells). One of the largest crystals seems to have a z or angular S shaped nano circuit in it.
The smallest crystal, shaped like a nano lemon and vaguely there is probably uric acid. While it's adjacent reflective lit up crystal --both surrounded by red blood cells-- is more akin to "5g" nanotech. And there is a lit up cyan-blue nano sphere or nano bead in the pic with the gloved hand.
Now here's the thing that really bothers me about the nano Spheres/beads. Nano beads/spheres are typically used as delivery methods. And, without a prescription can contain and be coated with anything from mRNA to pharmaceuticals. Some nano beads/spheres are used to erect a type of nano-scaffolding also known as "implants" in truther lore of former CommanderJ ames Casbolt aka Michael Prince circa 2004.
Though I concur the biotoxins create a noticable level of disfunction in my body;- I also realize today that there was much much more than ONE single biotoxin in the droplets of blood I gave for analysis. Toxic mold, was hardly the only culprit. And the manmade nano-spheres are still my greatest concern due to the unknown Bio-tech weapons and uses they connotate as everything from Genetical manipulation, to chemical delivery, to nano-bots, and data transmitter stations.