Excessive Violence by US State Actors

Below is my text and use of Google Maps to in a letter to  Nils Melzer, an international humanitarian attorney and about excessive force. Since I do not expect a reply;- I am posting this publically.

On 11/10/2011 I attended the APEC-ABAC Symposium for public shipping as a Japanese-American nisei. There was considerable concern from the diverse international Waikiki community about the large number of armed guards present and many residents fled their condos for the trade summit.

On the map, in orange is my walk from the bus stop corner of Ft. Derussy Park (an official US military installation) seated in the grassy center of Waikiki, Honolulu Hawaii. On the left side of the street, on the sidewalk were nearly a dozen armed soldiers (probably volunteers). 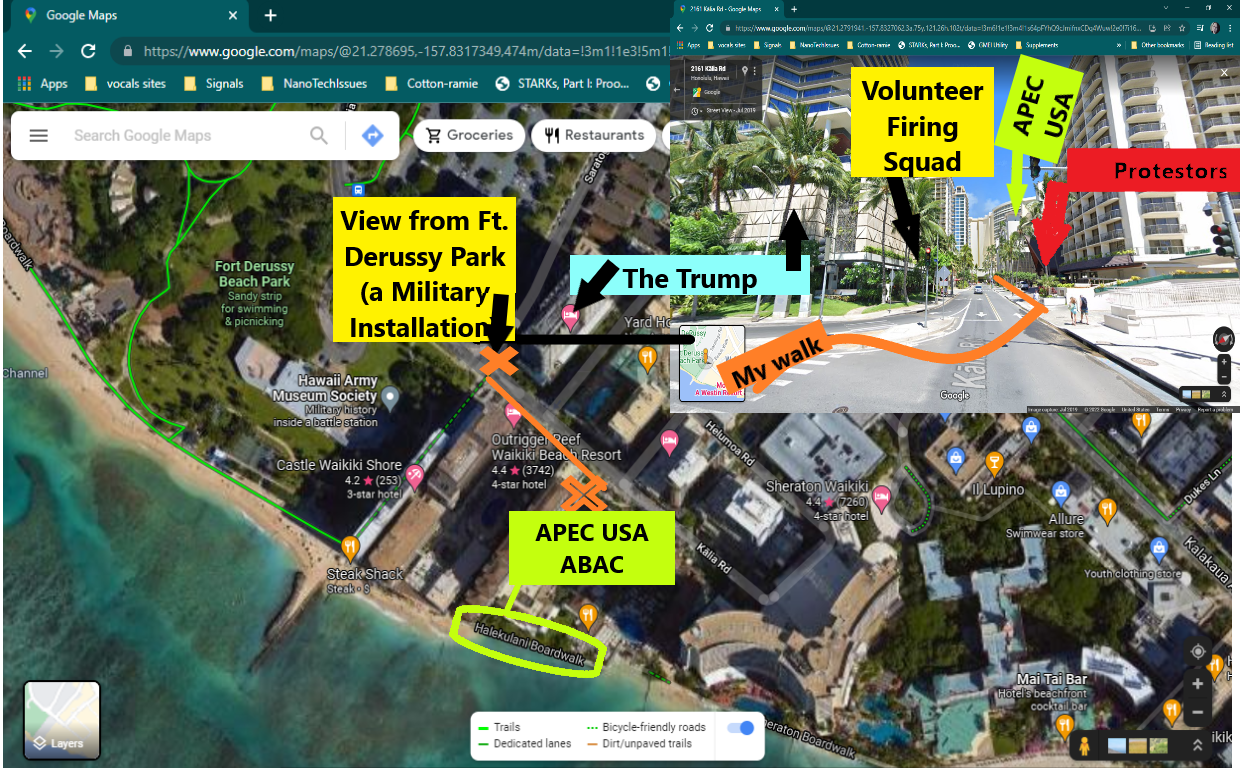 Since I was in a rush- having to complete proper attire at the nearby mall prior to my arrival- I hadn’t paid much attention to what was going on around me since there were concrete barricades, and limited bus service, and it was very empty for Waikiki.. But, I stopped and hesitated (OH SHIT moment) once I realized I walked into what military people called “an incident.”

This group of armed soldiers with M-16s had all of their weapons raised and pointed in my direction. I thought they had intended to shoot me since I did not see the protestors immediately. And I took a deep breath and kept walking until I noticed a group of protestors on my right.

Mr. Melzer, these 15-20 protesters were kneeling in the front row and standing in a back row holding a large banner written in Chinese. They were not in my immediate line of site due to walls by Shores and The Outrigger hotels before the final destination.  Not only were they peaceful and silent, but I do not believe that I deserved to be subjected to a firing squad with raised weapons and at such a close distance.

It was very clear that these soldiers had no intentions to take any other action than shooting the protestors. At the street level, I did not see anyone else in the area until I reached the Halekulani where the APEC-ABAC Symposium was held with Ambassador Schwab and other corporate reps.

Here is a link to the beach side security measures: https://www.hawaiinewsnow.com/story/16014591/apec-security-prompts-waterway-restrictions/

I would like to ask you;- how much violence is appropriate? Is this what the world wanted when they protested the trade summit?

I was psychologically impacted and I lost faith in the USA entirely, on nearly every level of non-immigrant society. And, other APEC attendees were dismayed with my stature in the USA community due to the prominence of my Japanese family relations. There will always be a clear line for the impunity of national leaderships and intelligence agencies But it became widespread in every facet of human rights across the globe.

Possible death by a volunteer USA military firing squad was highly unexpected for me. And I certainly didn’t expect to witness and walk through such a scene with the lives of so many protesters literally in the line of fire.  That type of scene is what I am concerned about in the near future for so many civilians.

Your voice is refreshing in the mix of today’s heavily biased media outlets. Many US attorneys are too chicken shit to handle such matters. The other side of contractors is gnarly. One the USA military told me to secure a TRO Temporary Restraining Order on, literally sued my attorney who helped women victims of domestic violence. That action impacted more women than me. And the impunity of them ordering me to get a TRO was allegedly not legal either. What would you do with an international paramedic who trained special forces? I did my best to get through it.

Lawyers fearful of targeting, take the easy client money, and sell out victims– it is a real issue with the US Department of Justice and many civil rights attorneys. They seek the glamor of affecting national policy. The pile of victims in their dossiers has grown out of control.

Thank you for your work and dedication to be a voice for human rights today. Thank you for speaking out against senseless brutality. Stay Stronger!!! Also Congratulations on your position with ICRC later in 2022!