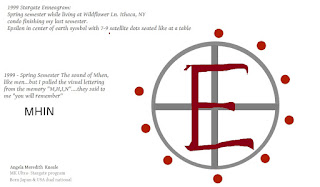 When I received the Enneagram, I was working on my last semester. I had recreational read Ishmael, and was working on my computer art and music, as well as still having involvement in the active Animal Rights (welfare) groups I ran and one a friend ran at Cornell University. My condo then was much closer to Cornell University. I in fact liked living on the C.U. side of the hill. And, previously in 1996 after returning to college in Ithaca after my organizer spout that took me from University of Montana, Missoula to Washington, DC as an intern I lived in a private home (with an outdoor heated pool, tennis court, basketball court) in legendary Carl Sagan's neighborhood.
Anyway, the Enneagram was a new thing to me and I had drawn it in a lucid state. I had to ask around a place where I worked in Ithaca (80% of residents have College degrees here at the time) and someone was able to tell me it was an Enneagram. I never received an explanation for it. Later in 99' I took to making it a kind of Earth logo and photoshopped a NASA topographical earth photo under the crosshairs and Epsilon. I was 25 at the time.

Later in 1999 I was to meet Dr. Joel Elkes, in Florida,  he was a professor also at John Hopkins University. I think this was the first time I remember my meeting with a programmer;- he told me that I have "Defiance disorder" because I would not do things they instructed me to do.  I met & briefly lived with Sally Lucke, who had been on the Board of Directors of the MOMA and she also was from a Chicago Export-Import family. I remembered just standing at the end of the driveway at my childhood home and "receiving" knowledge of taking care of an elderly woman. This woman later, was Sally Lucke's mother who was removed from the nursing facility. When I told Sally about my perception of this situation, she showed me her altar and told me it was her dream wish that she put out. I apparently was one who answered.
In hindsight, Dr. Elkes was her boyfriend. It's possible that I had been taken to the nearby clinic on Clymer Rd. or the cult also on the same road in rural Pennsylvania and programmed, and left at the end of the driveway.
Posted by Angela 菊地 Kneale at 8/04/2017 09:58:00 AM