I'm Getting tossed on the Streets by Hawaii & Federal Court

I'm living in Waikiki, my shortest tenancy in Hawaii to date. There's NOONE to actually enforce the "illegal utility shut-off" at my current residence, yet there is a Humane Society to provide Air Conditioning to the dogs and cats of Oahu. And, in theory;- there should have been some sort of protection for me as a tenant as this is a violation of my rights. And so, because I speak English, yet have no help to defend myself from the exploitation of my situation in the United States;- I'm getting tossed on the street It seems;- by May 31st, with only 22 days notice that have been absorbed by 22 days of court filing/research/consumer complaints, etc. And, includes 1 electrical fire on the Morning of Friday May 18th, 2012 in the PH-2 unit with an adjoining wall to PH-1 where I reside.

"Such conduct is deemed to be an unfair and deceptive act and practice and could subject the landlord to damages of a minimum of the greater of three times the monthly rent, or $1000 and an additional civil penalty from $500 to $10,000 for every day of violation." from website  http://hawaii.gov/dcca/ocp/landlord_tenant/res_lt_msg/7665.html


So, I have no relatives, no actual friends who can assist me, and am out of money. I will not live in a shelter situation. And, at this point;- this seems to be my exodus of Hawaii, the USA,  OR my Career choice that was my life;- I'm not sure which exactly.

Needless to say;- that I read in a US Bankruptcy Court Document that is related to this situation that the Representing law firm of the Housing Association of the Building where I currently reside today;- Has stated in their motion/docket that the landlord is helping me to "Defraud" their Association out of utilities while there is what is called an "Automatic Stay" that has been put in place to protect my landlord from Utility Cut-Off situation. I believe it's called Defamation of my Character/Libel per se and Malicious Prosecution against my District Court filed Ex Parte TRO against Unlawful Utility Cut Off that was filed the day before their Docket was filed in District Court.

So... Yes. I'm done with Hawaii. There is no remedy for my situation and I'm beyond fed up trying to live in the USA;- after everyone punished me for being related to some of Imperial Japan's past and Architectural Giants on the Globe.

You have killed me with nearly 40 years of discrimination and blatant human rights violations against my person, that no court or attorney would even attempt to protect. I will be dead before succumbing to a shelter or prostituting the streets of Hawaii. FED UP.

Unconstitutional to Who? My landlord's in Bankruptcy!!!

Moving day, I was so ecstatic to be moving from my old place and cutting my rent nearly in half in the Economy of April 2012. Little did I know, my NEW landlord was in bankruptcy.
I was aware that my landlord "may" be under foreclosure;- however I had an inexpensive room in a house on the market in a similar situation. I thought I'd be there for 1 month maybe two at first. I wound up living there for approximately 1 year until the sale of the house (approx. $682,000) was closed on.

I found out May 1st that my new landlord is indeed, in bankruptcy. And, in my searches through Hawaii's Supreme Court Library;- I have only found a few laws and cases that apply to private/personal leases and tenants taking landlords to court.

Plus, the electricity has been shut off since May 1st by the Association that runs the building. It's an older building so all of the utilities are not on separate lots. And, the Association/Board decided to try and force
anyone in the Penthouse apartment unit out of the unit by shutting off the utilities to the unit at the breaker box within the building. Keep in mind, the breaker box is indeed LOCKED.

Step 1.  After a nearly a week of discussion with my landlord in person I mailed a letter stating that I'd like the utilities restored.
Step 2. After his hearing with the Association in Federal Bankruptcy Court to have utilities restored;- the Association did not turn on the utilities. So I filed a petition(s) for TRO against Unlawful Utility Cut-Off as well as related "Claims for damages". Keep in mind, the landlord would possibly incur daily fines of $500 to $10,000 in Hawaii for not providing the basic hot water, electric, etc. (despite it not being his "direct" fault)

Step 3. The hearing for my case commenced yesterday May 16, 2012  as I feel I exercise my tenant rights despite under Hawaii District Court Landlord-Tenant Manual --The Landlord as the Debtor 365 (h)(1) "...the non-debtor tenant may elect to retain its rights under the lease."  And 365(h)(1)(A)(ii) specifically relating for my "quiet enjoyment, etc."

Step 5:  Filing Motion for lift of stay as by Federal Procedure/Bankruptcy/9:1111 Motion for Relief:
- as I researched in the Supreme Court Law Library and also viewing the forms for Motion for lift of stay/Automatic Stay. I am not in a typical Creditor position for which these Motion forms seem to be intended. Though i may use terms "non-debtor tenant and debtor-landlord" I do not feel that it doesn't compromise my BASIC U.S. Constitutional Rights. And so I found that there is 9:335 Constitutional limitation on exercise of jurisdiction by bankruptcy court, and am wondering why in the world I, personally have to file for the Motion for lift of stay despite my landlord and his property falling under Title 11.
It seems unconstitutional to me to have to even subject myself to being potentially held in contempt of court at the Federal level when this is a case that should only be held at the State or District level. I feel that the very act of Filing for Motion for lift of Stay violates my individual Constitutional rights that are deemed "Limited" by the Federal Bankruptcy court.

I'm screaming inside since this happened yesterday. I feel so Violated by the Hawaii Court System and that they are ordering me to deny myself my basic Constitutional Rights and also to Due Process.

When Japanese say that a country's people can fight, it is because Japan has battled them. And, it is talked about openly in different nations with different perspectives.

When people of other nations say that another particular country's people can fight, it may only be because they have heard a story of a battle. Though those battles may also be private and secret because they violate treaties in peaceful times. It is not on a world platform for others to discuss.

Why I am "insane"

For many years in the USA I've endured extreme discrimination and human rights violations against my person, my livelihood, and my life. Nearly all of my dreams for my life have vanished in entirety and with the death of my siblings.
My so called friends, such as many people on my Facebook and in my life, are psychologically abusive and also harbor and support white supremacist beliefs;- since many "friends" are from my hometown, and my past.
I'm also not proud of being forced to live the life of an "activist" on the East Coast because it is a sure sign of the extreme suppression and abuse that I have had to endure. Activism was a way for me to survive at a bare bones minimum for my life when being attacked, abducted, assaulted, and violated in rich/wealthy caucasian neighborhoods where I was employed as a classical piano teacher/faculty.
My so called friends and others around me such as "employers" as they call themselves enjoy making light/fun of my alleged family in Japan. These friends and "employers" have no way of proving and are not wealthy enough to be entitled to information about my relations in Japan. Additionally, because they suppress and have suppressed not only my success in my life to make peaceful options available;- they would like to "prescribe" medication to me for my claiming such "outrageous" things such as being related to certain individuals in Japan, or having a decent life. I have found that this includes many other Japanese-Americans in the USA/Hawaii who enjoy their lives that they have built in the USA in the sex trade and related "Hawaiian & Asian professions".
I find their presence and interaction in my life intolerable, demeaning, and insulting.
However, just like normal Americans of any race or ethnicity;- the people I have met in Hawaii have only used me to take any earnings that I had to create and develop what I came to Hawaii to do. I am only if anything left with basic shelter, clothes, and food. It has literally been a miserable 8 years since my life has been dismantled by others in the American public from Pennsylvania/New York and to Hawaii.

Warriors of the Rainbow- May 3 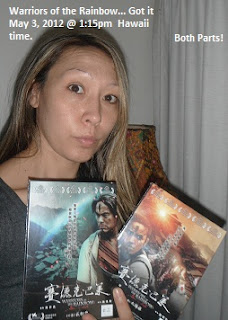 US Postal Service vs. Mail Fraud

Secure PO Boxes will vanish with the closure of USPS branches. Mail Fraud and use of other persons' addresses will escalate, despite it being a felony offense. We know mailboxes with cameras can be dismantled with the Baseball bat. Renting private addresses from other Domestic USA shipping contenders is undesirable in some cases and also expensive.
Scary...
Posted by Angela 菊地 Kneale at 5/03/2012 05:26:00 AM