Ice Falls at Baie Finn in the Winter 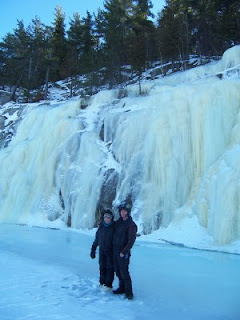 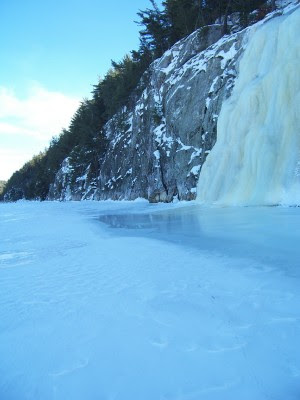 Here are a few photos of the frozen McGregor Bay and Baie Finn area in Ontario Canada. It is a popular boating and Yachting area during the warmer summer months.
We arrived by snowmobile in the blistery cold.

Tonight I was fortunate enough to try some Safari Liqueur while watching the presidential address. I was mortified while listening to Bush's speech. Liqueur...a bunch of beers earlier, some Thai food... and then Bush's Presidential address happened. His economy proposal for the nation that may only take the form of carbon credits... the Medicare plan that may be for the self insured retiree candidates with high incomes only (I’ve heard over $100,000/ year). And the continual war on terrorism with the U.S. military is able to hire its own civilians for special ops. ...an idea that mortifies me... because then how is the world to determine what is truly terrorist versus what is truly America's (the U.S.) since there is such racism and nationalism with in the United States. Or, that people like my father who can shoot well as a Class 1 could potentially eliminate the other side of my family in Japan. ;- Or, occurrences of like instances with other families and friends scenarios. Additionally, the fact that the U.S has gotten our asses kicked hard in Iraq and that we still cannot return home. It seems that 40 years of isolation would do it here in the U.S.
The perpetual reign of the U.S. enterprise over the citizens here to eliminate funding and force people to join the military and participate in the infrastructure change or a heightened "homeland security"...as the U.S. corporation makes significant job cuts to stay afloat and enable an elite Executive lifestyle that leaves the majority of U.S. citizens grasping for ways to live. Is the American public really going to perpetuate more of the bourgeois corporate elite by sacrificing more of today's youth just to save the increasing crime rate due to loss of jobs and an overall participatory economy?
Posted by Angela 菊地 Kneale at 1/23/2007 07:35:00 PM