From Left to Right; Photo from the Dress rehersal ; Korea, Japan (that's me with the Obi- though I wore a wedding Kimono for the real show), Formal Kimonos; Manchurian dress, and Indian Dress. 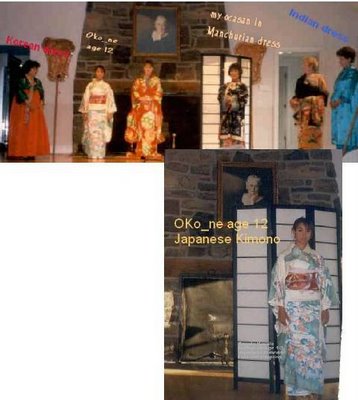 I was going through some old photographs of some of the things that I did as a child.
This event at Pearl Buck Foundation was good for the few people who attended to see what some of the different traditional forms; and modern forms of dress of Asia are. BTW: I am not transracially adopted; My biological mother or nanny immigrated to the U.S. from Japan.
Posted by Angela 菊地 Kneale at 7/25/2006 07:26:00 AM