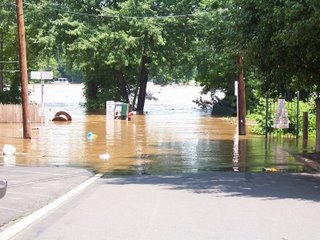 This is about the Flooding and 8 ft. swell on it's way to the Trenton, NJ dam. Ringing in at anticipated though appx. 21ft of flooding in New Hope, PA (a popular tourist attraction);-- Store owners were preparing for the swell of water prior to the 4PM evacuation deadline. Road Closed signs were being taken off trucks and moving trucks were parked in front of Downtown NewHope stores and Homes for the evacuation. This is to be "one of the big ones since the flood of 55'." stated one anxious, but calm store owner. He drew a line with his foot on the sidewalk where he expects the water to stop and tapped his food on the front stoop of his store, saying "that means up to here, up to here" and "...the last one was up to here." while moving things inside appx 3ft higher than the store's floor level.

Yesterday; I was on a shared drive up to Wegman's for some grocery shopping in Bethlehem.
The Flooding was Fierce by the bridges in the Lehigh Valley. The level of the River had risen approximately 13-15 feet from the normal level. Also, on the drive there was a canal that was dry as a desert ditch, though in creepy Kitnersville, PA. The Canal in Kitnersville area sat empty due to damage incurred from the last Delaware River Flood. The rain subsided here in Bucks County early in the morning; though the storm moved further North to the Lehigh Valley area. They are expecting a swell from the Lehigh area to move through the Delaware and be in the NewHope area by tomorrow afternoon. The waterway in Trenton, NJ is to be flooded approximately 8 feet over the floodline. And, there may be more area thunderstorms tonight.